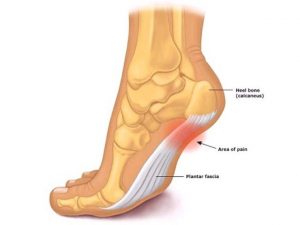 Plantar-fasciitis is a condition sometimes also called heel pain and “policeman’s heel” among other titles.
It is a sharp, intense pain felt in the foot, usually just in front in front of the heel but sometimes in the heel as well and usually occurs first thing after getting out of bed or when the patient has been sitting still for a period such as watching tv in the evening.

It is caused by constant stretching of a long band of cartilage called the plantar fascia, which holds the structure of the foot together.

There can be a number of causes, such as obesity, long periods of overuse (such as jobs that involve standing and walking for most of the day) or tight leg muscles.
It is the strain exerted on the cartilage which cause the fibres of the plantar fascia to break, leading to inflammation and pain after a period of rest.
It most commonly seen in women aged around 40-60, but almost anyone can develop it.

It usually improves after a few steps have been taken, but the period of pain can be extremely uncomfortable.

The good news is that it can be easily treated and will usually get better, but the cause needs to be investigated.
Sometimes (but by no means always) orthotic insoles may be required to help the foot to function better and relieve the stress on the plantar fascia. Sometimes exercises to reduce muscle tension may be all that is needed.